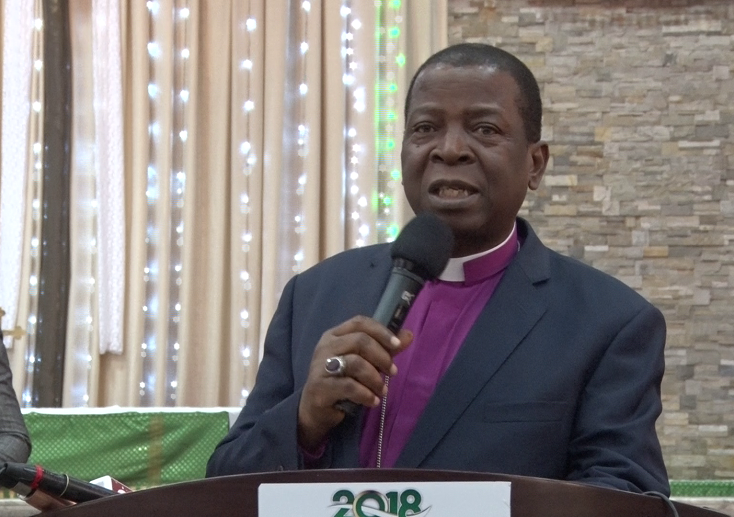 “Politics is a social science that has to do with our everyday life. So, it is good for us to exercise ourselves by discussing politics as it affects us, because whether we like it or not, we are part of it.”

These were the words of the Primate of All Nigeria Anglican Communion, the Most Rev. Nicholas D. Okoh at the symposium on Christians and Politics organized by the Diocese of Abuja as part of the weeklong activities for the 2018 Carnival For Christ, which was held at the Basilica of Grace Church, Gudu District, Apo Abuja. Primate Okoh highlighted the history of politics, defining it as the normal way people decide how they would be governed. He said politics is important because it affects everyone, both old and young, and everything, including food, water and electricity. He stressed the importance of politics, stating that everyone must show some level of interest in it to survive or live. He opined that partisan politics is good, because it provides the opportunity for one to join a party that shares the same ideologies or philosophies with oneself. Hence, he encouraged all present to join a party and climb up from there.

The Primate observed that it is only in Nigeria that anybody can cross from one party to the other in a split second, without minding the ideology or philosophy or manifesto of the party. According to him, this shows that people are actually looking for space for power rather than campaigning for ideas. Nevertheless, in spite of all the challenges embedded in politics, Primate Okoh urged all not to wait until politics becomes clean before they get involved, because they may wait forever. This, according to him, is because the life we live in this world can never be perfect and so politics that is managed by human beings who are not perfect cannot be expected to be perfect in this world.

Archbishop Okoh pointed out that the concept that politics should be free and fair is hardly possible, because all the contestants during an election cannot all win; adding that the loser would definitely feel cheated and disgruntled because of the time and money vested in the pursuit for power. He said that politics is not easy and often times, human behaviour and desperation of politicians can upset the balance. He said even the masses are sometimes guilty of upsetting the balance when they expect politicians to give them money or some form of inducement before they can vote for them and not because of what they can offer. The Primate explained that once a person accepts bribe then that person has negotiated his or her rights and expectations and as such, should not expect anything else from that politician or turn around to complain.

The head of the Anglican Church in Nigeria described rigging as a terrible thing that undermines the integrity of any election. He however added that it would be very difficult to achieve a corruption free election in Nigeria and in developing nations, because of how neck deep corruption is in these countries. He questioned the independence of the Independent National Electoral Commission; adding that even the courts that ought to uphold justice and the media that relays information are in the hands of politicians; and therefore, all of these affect the integrity of the results of elections. Nevertheless, he further added that the situation is not hopeless if all can arise and stand for what they believe in and control the elections, so that those who do evil will not have a field day to do evil. He said if Nigerians want to eradicate corruption, they must work for it.

Primate Okoh emphasized that the people who do the greatest harm to the nation are those who remain passive to politics; that is, they do not register, vote, and join a party or campaign for one. He said it is better to get involved and move ahead than to not do anything and then wait for the results or complain after elections. He pointed out that the media is indispensable during elections because they let the world know what is happening. But, according to him, the weakness of the media is that it is owned by the politicians, who many times doctor accurate information supplied to them by journalists and reporters to suit their own selfish interests. The Most Rev. Nicholas D. Okoh concluded with a charge to Christians to arise and position themselves to elect the right candidates who will move this nation forward and put an end to the crisis in the land.