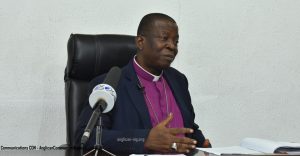 God is prepared to restore Nigeria to unity in the midst of  killings, insecurity and confusion, the Primate, Church of Nigeria, (Anglican Communion), the Most Rev’d Nicholas Okoh, has declared.

Speaking at a press conference to herald the 8th edition of the Divine Commonwealth Conference (DIVCCON) at the National Christian Centre, the Primate revealed that the promise of restoration was a divine revelation from God in the build-up to the annual conference.

‘‘We have been facing a lot of challenges in terms of security in Nigeria.

‘‘There was a time when going to Church, Mosque or any public gathering was a problem. These things (insecurity) have been with us and drove a very big wedge among Nigerians; trying to make us hate one another, trying to bring about disintegration in a country we have grown to love.

‘‘So when the planners of this conference meditated on the way forward, we believed that God has something to say to us in the midst of the confusion, trouble, friction and trouble. Where is God and what message does he have for our people in a time like this?

‘‘Where there will be togetherness and the South and all will be together,’’ Archbishop Okoh told newsmen at the Conference Hall of the Primate’s Office in Wuse Zone, 5, Abuja.

Continuing with the message for the nation, the Nigerian Anglican leader added : ‘‘there will be no more fear of domination or exclusion and people will be united under God.’’

The Anglican leader therefore appealed to Nigerians that even though there is cynicism in the land they should believe with faith that the divine hand that brought Nigeria thus far, will fuse Nigerians together.

He further assured that God will restore Nigeria’s educational and legal systems but warned that for the healing to manifest the Church and the nation must be ready to repent and change.

Backing the revelation with the Scripture, the Primate quoted 2 Chronicles 7: 14: “If my people who are called by my name will humble themselves and seek my face and turn from their wicked ways then I will hear from heaven and forgive their sins and heal their land”. (2Chronicles 7:14).’’

According to the Primate, ‘‘a heavy rain of blessings is coming, and the heavy dysfunctions will be no more.’’

The Primate also used the occasion to reaffirm that it is an incontrovertible fact that the Christian heritage is unsurpassed and unbeatable in all its ramifications.

Noting that the Church is one foundation with a common heritage, nurtured by the forebears over the years, the Archbishop urged believers to embrace this heritage in order to experience transformation.

‘‘If this inheritance of faith is embraced sincerely as it is given and stated in the Bible the believer will be transformed,’’ he said.

Fielding questions from journalists on the agitations for a new National Minimum Wage, the Primate said it was unrealistic for the Federal Government to think that workers can live on N18, 000 with galloping inflation.

He called on governments at all levels to not only increase minimum wage, but also increase employment opportunities, means of production and stabilize the economy.

He also admonished Nigerians to exercise their civic rights in the forthcoming 2019 polls, shun election malpractice and diligently vote for persons willing to work for the development of the country.