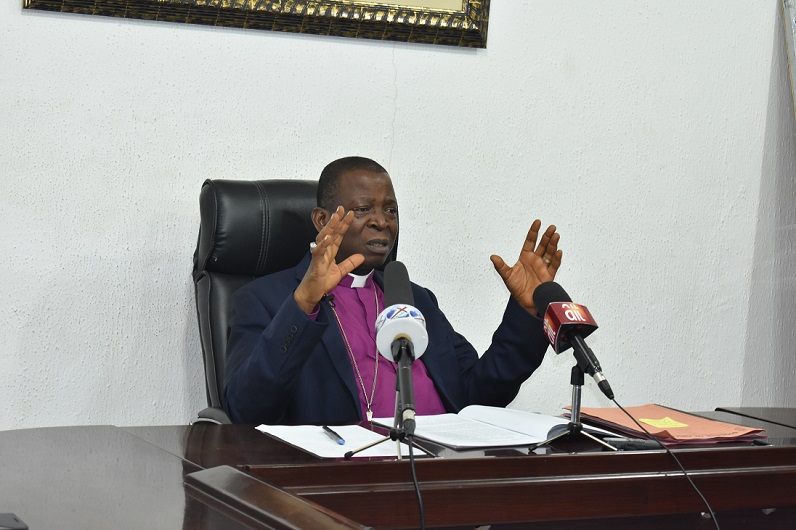 The Primate of the Church of Nigeria Anglican Communion, the Most Rev. Nicholas D. Okoh has charged Nigerians not to lose faith, but believe that the divine hand that has brought the nation thus far, will restore all that has been lost.

He gave this charge at the press conference organized in preparation for the 2018 Divine Commonwealth Conference (DIVCCON), an annual convocation of believers in Christ hosted by the Church of Nigeria Anglican Communion that is to take place from Monday, 12th to Friday, 16th of November at the National Christian Centre, CBD, Abuja.

Speaking on the theme for this year’s DIVCCON, “I will restore,” the Primate said that God is willing to restore all that the nation has lost, including its unity; but that Nigerians must be prepared to pay the price for restoration. He stated that this condition, which is embedded in this Scripture, “If My people who are called by My name will humble themselves, and pray and seek My face, and turn from their wicked ways, then I will hear from heaven, and will forgive their sin and heal their land,” (2 Chronicles 7:14) will be brought to the fore during the conference. He described the gathering as a divine property and an avenue to share Christian blessings and celebrate the inheritance of faith; declaring that the Church is one foundation with a common heritage, so that all who are yet to understand the message of the gospel can do so and also share with others.

He said that the theme suggests that some things have been lost and therefore, in need of restoration. Citing the example of the Nigerian situation, where the country is facing a lot of security challenges, the head of the Anglican Church in Nigeria said that the nation is in need of restoration. According to him, the challenges being faced in the nation is making Nigerians hate one another and desire to disintegrate from the country they once loved and vowed to protect; hence, the reason behind the theme for this year’s conference. Primate Okoh pointed out that even the Church is in dire need of restoration, because there have been a lot of teachings from the pulpit that are not healthy, that have destroyed the society rather than build it. He stressed that God is prepared to restore Nigeria to wholeness; where the nation will become cynosure of all eyes; a country where foreigners will come on pilgrimage, and a united nation, where there is no fear of domination by any tribe or religion. This, he said, is the vision of this year’s conference.

The Primate of all Nigeria explained that the theme is prophetic of what is set to happen, because Christians in Nigeria are willing to give themselves back to God for Him to restore the nation. He opined that some persons may laugh at the Church saying that restoration can only come through calculation and politics; he however, charged the Church to believe in faith, holding on to God’s promise of restoration and fulfilling their own part of the covenant. Primate Okoh expressed sadness that a lot of things have been lost in this country, including time and respect from other smaller countries in West Africa; because according to him, 58 years as a nation is enough time for Nigeria to have matured. He however gave the message of hope to Nigerians, declaring that God has heard the cry of His people and is set to restore. Thus, he concluded that the message the Church is set to deliver to all in attendance is a message of a new Nigeria, where all who are against the vision of one nation should not be allowed to rule.

Meanwhile, while fielding questions from journalists, the Most Rev. Nicholas Okoh explained that DIVCCON was initiated to close the loophole in the Church’s development as the body of Christ. He said the programme is designed to bring together people from different parts of the country, and of different denominations to interact to move the Church of God forward and the nation. According to him, in the future Nigeria, the emphasis will be ecumenical and not denominational; because, the problems in Nigeria are more than can be solved by any one denomination, no matter how large they are.

On the debate of minimum wage between the Federal Government and the Labour Unions, the Primate termed unrealistic the fact that the masses are expected to live on N18 000, with the high rate of inflation. He however noted that an increase in the minimum wage alone is not a holistic solution. He therefore appealed to the government to not only increase minimum wage, but also increase employment opportunities, and increase means of production, so that the Nigerian currency can have value.

On the role of individuals and leaders towards the restoration of the country, the Primate advised that everyone must play their own part; vote in the right people who are willing to do the work and ensure that nobody rigs elections.