COMMUNIQUE ISSUED AT THE END OF THE STANDING COMMITTEE MEETING OF THE CHURCH OF NIGERIA(ANGLICAN CHURCH) HELD AT ST ANDREW’S CATHEDRAL CHURCH, WARRI, DELTA STATE, FROM MONDAY 4TH – 8TH FEBRUARY, 2019.

The Standing Committee of the Church of Nigeria (Anglican Communion) held at St Andrew’s Cathedral Church, Warri, Delta State, in the Diocese of Warri, Province of Bendel, under the guidance of the Holy Spirit and presided over by the Most Revd Dr Nicholas D. Okoh, Archbishop, Metropolitan and Primate of the Church of Nigeria. In attendance were his wife, Mrs Nkasiobi Okoh, the President of the Women’s Organisations; the Dean of the Church of Nigeria, The Most Revd Dr Ali Buba Lamido, 135 Bishops, 120 Clergymen, 89 members of the House of Laity and delegates of the Mothers’ Union. It welcomed many guests including the Executive Governor of Delta State and his wife, His Excellency, Senator Dr Ifeanyi Okowa and Dame Edith Okowa, His Excellency, Mr Peter Obi, former Governor of Anambra State, Chief Great Ogboru, Senator Ovie Omoagege, the representative of the Chairman,  Independent National Electoral Commission (INEC), Dr Muhammed Lecky,  and traditional rulers from the region.

The theme of the meeting was The Lord is My Shepherd, taken from Psalm 23, a popular psalm that is well known to Christians all over the world, and which many Christians learn to recite from childhood.  The Psalmist encourages all to see the Lord God as the faithful shepherd who provides, protects and delivers his flock even from the valley of the shadow of death. Mindful of God’s unfailing loving kindness demonstrated in Jesus Christ, the Good Shepherd, who does not slumber or sleep, but rather cares for his own to the point of giving his life for all; the Standing Committee therefore calls on all to trust God in spite of the tension and palpable fear that have permeated the whole land.  The Standing Committee calls on political and secular shepherds to be faithful in their respective callings to protect and care for those over whom they are placed as shepherds.

The Standing Committee notes with utmost concern the lingering state of insecurity in our country characterized by unprovoked attacks, kidnappings by armed bandits who exploit the ordinary citizens for their clandestine and illicit acts. It notes with curious relief the present state of near-absence of the herdsmen menace, praying that this will be a permanent and genuine closure to such troubles, even after the elections.

It further reminds the Federal Government of the agony that the continued captivity of Leah Sharibu has inflicted on her immediate family and the wider society, and urges it not to relent in its efforts to rescue her, the remaining Chibok girls and others in similar captivity of the Boko Haram Islamic sect unhurt.  It calls on the Federal and State Governments to, as a matter of urgency, increase their efforts in restoring permanent peace in any troubled areas of the country. Security is a primary task of government that it must not fail in.

The Standing Committee commends the Federal Government for the increment in Workers’ Minimum Wage, particularly for the House of Representatives’ passage of the N30,000 minimum wage Bill.  It calls on the concerned parties to settle issues relating to this in due course. Above all, it calls on the Federal Government to deal with matters that will lead to the revival of the economy, to increase stability and fund generation, as a permanent and more realistic solution to the agitation for wage increase.  This will make for the eventual payment of reasonable living wage to Nigerian workers, which is the desire of all.

The Standing Committee notes with dismay the lingering crisis in our tertiary education sector that results in incessant industrial actions by the members of the Academic Staff Union of Universities with its attendant negative implications on our teeming-youth. There is an urgent need for all concerned, especially the Federal Government to find a lasting solution to this menace, so that our already struggling education system will not crumble.  It appeals to the Government to deal with this issue, especially by making appropriate provision in the budget in line   with international convention.

The Church appreciates the constitutional provision for freedom of religion and association. It strongly appeals that the multi-religious nature of the country be preserved, and that no subtle attempt or effort is allowed to circumvent it. Rather, religious freedom should be guaranteed at all levels. It further urges politicians to make a commitment to this in their campaigns.

As the General Elections draw near, the Church commits itself to continued prayers for peaceful and violence-free elections at all levels. It strongly urges politicians not to compromise the integrity of the elections through hate speeches or acts, or by offering any form of inducement towards vote-buying. It calls on all eligible voters to be guided by clear and good conscience and not involve in vote-selling or any act of political thuggery that could spell doom for the country. While urging politicians to play by the rules, it calls on INEC to maintain the position of an unbiased umpire that it is expected to be. Security agents are also called upon to maintain neutrality in the discharge of their constitutional duties.

The Church expresses great worry about the current situation that is confronting the Judiciary. While it frowns at any form of corruption at all levels, it calls on the Federal Government and all concerned to follow appropriately the rule of law in dealing with matters affecting the judiciary and any arm of Government. It further calls on the Federal Government not to be selective in obeying court orders so that the sanctity of our judiciary can be preserved

The Standing Committee gives thanks to God on behalf of the Vice President of the Federal Republic of Nigeria, Prof Yemi Osinbajo, for averting the disaster of a potentially fatal air crash, and pray for God to continue to protect all our leaders in their travels. It further calls on the aviation industry to give utmost attention to prompt and regular maintenance of all air craft to ensure safety of all air passengers.

The Church of Nigeria remains committed to the Anglican Church in North America (ACNA) and its mission through the Convocation of Anglican Churches in North America (CANA). The role of the Church of Nigeria in advancing the ministry of the gospel and in upholding orthodoxy in both teaching and practice in the Anglican Communion remains a matter of utmost importance.  It pledges therefore its continued prayers and support to CANA and ACNA for this joint mission.

CONCLUSION
Finally, the Church of Nigeria (Anglican Communion) expresses its confidence in the Lord God Almighty as the Shepherd who will provide, protect and deliver Nigeria from every form of evil, and therefore calls on all not to fear. The Lord is my Shepherd I shall not want…Though I walk through the valley of the shadow of death, I shall fear no evil because you are with me; your rod and your staff they comfort me (Ps.23:1, 4). 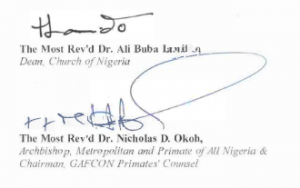