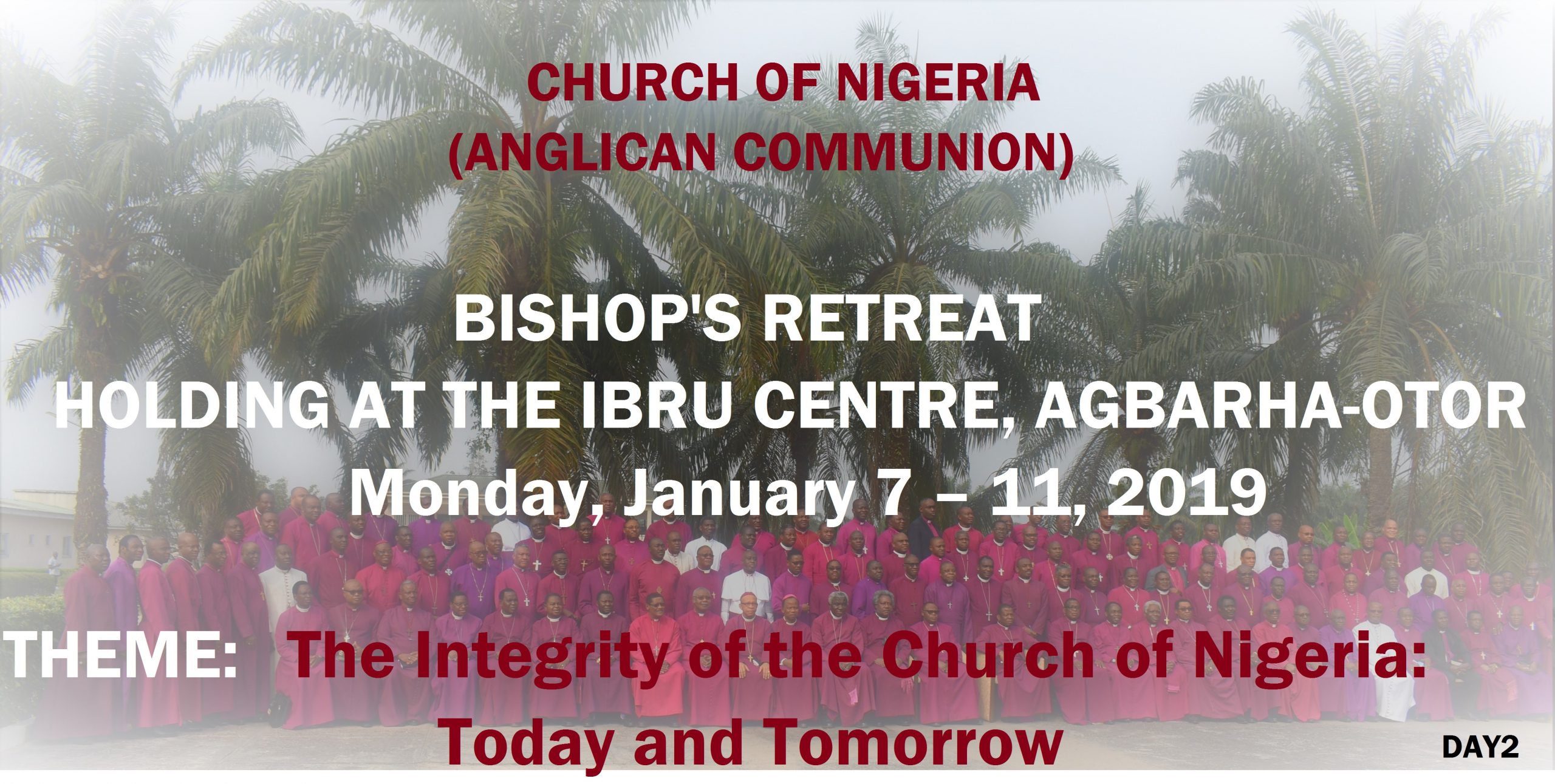 By Ven Foluso Taiwo
The church of Nigeria Anglican communion without being immodest, has remained focused and vibrant as it was when she fought vehemently against sexual perversion which the revisionist’s agenda proponents have tried to force down the throat of the Anglican Church.

The Rt. Rev. Dr Cyril Odutemu bishop of the Diocese of Ughelli gave this assessment during

the early morning holy Eucharist service marking the formal opening of this year’s 2019 annual retreat of the Anglican Bishop’s in Nigeria and diaspora, holding at the IBRU International Ecumenical Centre at Agbarha-Otor in Delta State.
Defining integrity which is the theme of this year’s retreat, Odutemu said the quality of being honest and having strong moral principle that manifest righteousness probity and rectitude is what integrity is all about.

He reiterated the stand of the church as he expantiated on the theme “the integrity of the church of Nigeria, today and tomorrow as he recalled with nostalgic feelings the role of church fathers in Lambeth and the insistence of the authority of the scripture over the ungodly spirits which he said cannot be disputed.
He brought to fore the sacrifices of the former primate The Most Rev Peter Jasper Akinola and the selfless service of Most Rev Nicholas D. Okoh the incumbent primate of all Nigeria (Anglican Communion) with the establishment of GAFCON was overwhelming.
He said that God has been using the Nigeria Anglican Communion to pursue the agenda by proving the devil wrong, that the strength of the church will be weakened by the devilish act.
He also culled out the words of primate Okoh on GAFCON website that faithful Anglicans are being drawn around the globe from all different cultures and the wisdom of God is demonstrated.
Bishop of ughelli diocese opined that with the publications like the daily fountain, bible study and children manuals spiritual dynamism is imminent and the developmental achievement is monumental.
Dr Cyril Odutemu said without prejudice to these landmark achievements of the communion Satan is using his cronies the distractors, forces of darkness to threaten the church value system and undermining the integrity and the revered tradition and respected constitution are being threatened day by day.
He said the various crisis that have rocked the church today are as a result of indiscipline brought about by the relegation plans of the forces of darkness adding that respect to constituted authorities of the Bishop is no longer there as before. He stated that the good news however is that the church is moving on with pragmatic evangelism being witnessed on Dioceses including DIVCCON that has won so many souls.
He gave kudos to the Ajayi Crowther University (ACU) Oyo and great work of the indefatigable vice chancellor The Rt Rev Professor Dapo Asaju in the university and Paul’s University movement to greatness in academic programmes and great spiritual diet.
To the chagrin of the preacher, many fathers in God who have been pace setters are retiring from the house of Bishops, his fear is their exit could lead to the extinguishing of the role they have been playing, questioning what will happen to the church when this generation that founded GAFCON, have gone.
He asked if the church would be able to defend the faith once delivered to the saints, maintaining the integrity of the church of Nigeria as pounds and dollars flow in from the cronies in USA, UK and Canada.
Many unanswered questions were raised. Will the influence of the past modern culture, revisionist agenda, poverty and jostling for positions and officials divide the Church?
Will the church walk along the integrity of past church leaders like Olufosoye, Adetiloye, Akinola and Nicholas Okoh that will soon go.
He admonished that the church should make their choice to defend the faith adding that the Lord will deliver His church