TRUE GREATNESS LIES IN THE SERVICE TO GOD AND HUMANITY- PRIMATE OKOH. 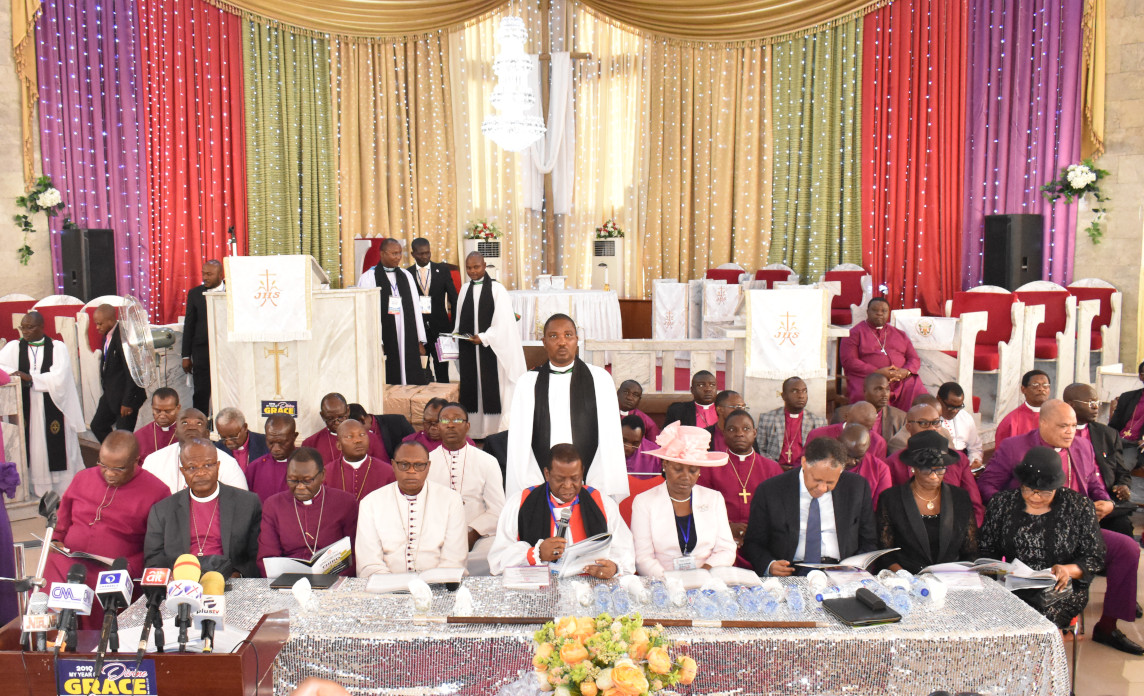 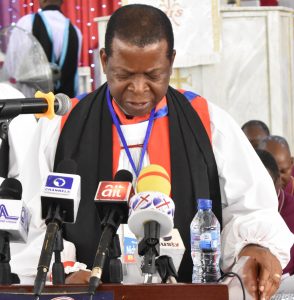 These are the words of the Primate of all Nigeria, Anglican Communion, the Most Rev. Nicholas D. Okoh while delivering his Bishop’s charge to the 3rd Session of the Tenth Synod holding at St. Matthew’s Church, Gwarinpa Estate, Abuja. He highlighted several qualities of a servant leader, lamenting that Nigeria is in terrible short supply of service-oriented politicians, statesmen and women. He said the country has “excess supply of reward-induced politicians, including Christians” who have forgotten that true greatness lies in service to God and man. According to Primate Okoh, many great achievers and leaders may be said to be great, but only those who actually serve their time and generation, especially the lowly in the society are truly great.
Speaking on the theme for the 2019 Diocesan Synod, “Servant-Leadership,” the Bishop of the Diocese of Abuja described Jesus Christ as the greatest leader and teacher, who taught His disciples the timeless lesson of servant leadership in both word and deed. Archbishop Okoh defined leadership as having nothing to do with imposing one’s position or views on others, but rather having the capacity to lead. He explained that a leader must be an individual with a vision, one who motivates, serves, listens to, and manages others. Listing out other elements of the art of leading, the Cleric stated that “Leadership that does not influence and make servants out of subjects cannot pass the test of servant-leadership.” He said just as Jesus served obediently like a slave, Christians ought to do likewise and wholeheartedly serve the society in their different calling.

On the state of the nation, Primate Okoh described as worrisome the renewed rampage of killer herdsmen and bandits around the country, calling on the Federal government to wake up to their foremost responsibility of security of lives and properties of the citizenry. He termed as a good step in the right direction the signing of the New Minimum Wage bill, but called on the administration to remember pensioners and on workers to be dedicated. He congratulated all the winners of the 2019 general elections, commending aggrieved parties and persons for seeking redress in the law courts, rather than taking laws into their hands.

He appealed to the government to create employment opportunities for the youth, so they can live purposeful lives and further urged the present administration to deal decisively with the problem of power, which is paramount for economic growth and stability.
Mid way in his presentation, the Primate took time to commend the Rev. Yakubu Maigaya for his doggedness at work at Gude Deanery, a Rural setting of the Diocese. He said his effectiveness and diligence at work is unsurpassed. He showered encomiums on him and in appreciation the Primate The Most Rev. Nicholas D. Okoh preferred the Rev. Yakubu Maigaya to a statutory position of a Rev. Canon in the Diocese of Abuja.

Meanwhile, in an interview after the reading of the Bishop’s charge, the Most Rev. Nicholas D. Okoh further emphasized the need for servant leaders in Nigeria, stating that such leaders have not been in large supply. He said the country needs leaders who will cater to every individual, irrespective of tribe, religion or status; true statesmen and not just politicians. He urged President Muhammadu Buhari, who is to be inaugurated for his second term as President of the Federal Republic of Nigeria on May 29, to focus on uniting Nigeria, because according to him, “We are not united.”

The formal opening of the Synod of the Diocese of Abuja was well attended, with representatives of the House of Bishops, Clergy and Laity and dignitaries from far and wide, including the former President of the Federal Republic of Nigeria, His Excellency, Goodluck Ebele Jonathan, who denied the allegations that he stole billions of Naira from the coffers of Nigeria and further urged the Church to continue to pray for Nigeria and for him and his family.

SERVANT – LEADERSHIP IS NOT A TECHNIQUE (Rt. Rev Stephen Akobe)

The Bible Study Leader at the Synod, Rt. Rev. Stephen Akobe used all emphasis at his command to say that it is the heart of Christ and Christlike attitude that has distinguished servant leadership from other types of leadership.

Bishop Akobe defines Servant Leadership as a timeless concept. The phrase, “Servant Leadership according to him was coined by Robert K. Greenleaf in an essay that he first published in 1970, said servant leader has the natural feeling of service first. He expantiated that servant leadership is not a technique as such, but a philosophy and a way of behaving that enriches the lives of individuals building better organisations and above all creating a more just and caring world. Interesting and quality contributions attest to the fact that Servant leadership is the only Panacea that can bring in dividends of democracy and the much desired development in our country.