THE PEACE OF GOD, THE ONLY SOLUTION TO LIFE’S CHALLENGES – ARCHBISHOP MADUOMA

According to the Most Rev. Dr. Caleb Maduoma, Archbishop of the Ecclesiastical Province of Owerri and Bishop of Ideato, the word on the lips and minds of Nigerians in recent times is the word, ‘peace.’ This, he said is not just because there is a lot of crises in the nation, but because Christians living in the world are constantly facing battles. He made this known while delivering his Bishop’s charge to the Third Session of the Seventh Synod held at St. Paul’s Anglican Church Umuobom in Ideato-South L.G.A of Imo State. Speaking on the theme, ‘The Peace of the Lord be with you,’ the Archbishop emphasized that it is only the peace of God that can help believers overcome the challenges they face in life. He said everyone is involved in the search for peace and that this search will continue even in a sinful and corrupt world. 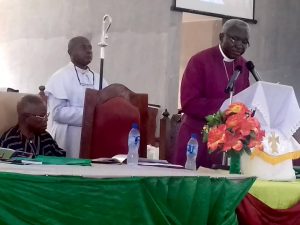 The Bishop of Ideato diocese explained that the world cannot achieve or provide peace, because it cannot in itself, deal with the problem of sin. He said this is why it is difficult for the human heart and mind to totally comprehend the peace that God gives. He highlighted various interpretations of the word, peace, mentioning that New Testament writers add a more comprehensive spiritual element to the Old Testament concept of peace that focused on the physical well-being of man by interpreting the concept of peace as reconciliation between man and God, man and his fellow man and man and himself. He defined the Hebrew word, ‘shalom’ meaning peace, as soundness, completeness, security and safety; pointing out that the word when used in the Bible referred to several situations, including the cessation of hostilities between nations. He however added that in all of these situations, divine influence is evident and no human activity in the Bible was without divine interference.

Using the example of the National Peace Committee in Nigeria, an institution set up to ensure peaceful transition in government, Archbishop Maduoma noted that the quest for peace will continue even in the midst of so much corruption and decadence. He said that to a great extent the establishment of the committee helped to foster peace during and after the 2015 general elections, which led to the Peace Committee embarking on a similar mission in the 2019 general elections. Nevertheless, he stressed that only the peace of God can calm the chaos in this present world.