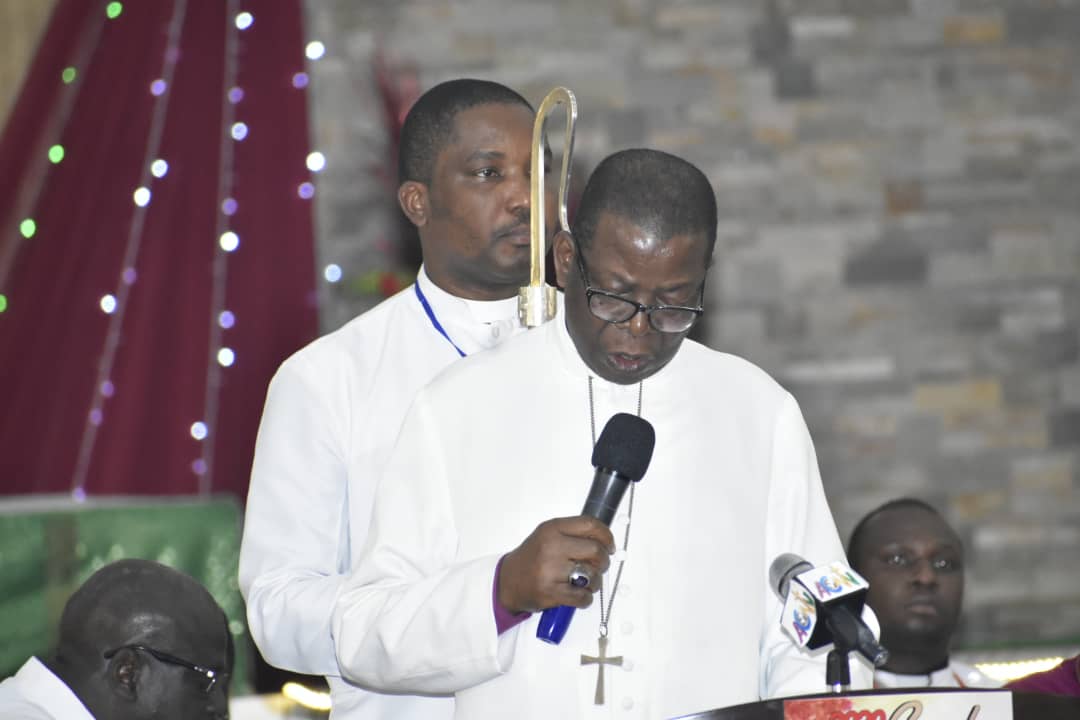 The Primate of All Nigeria and Bishop of the Diocese of Abuja Anglican Communion, the Most Rev’d Nicholas D. Okoh has charged Church leaders to take heed to themselves, lead by example, and guard the flock of Christ by arming them with the truth of the gospel. He gave this charge at the One-Day Valedictory Synod of the Diocese of Abuja, held at the Basilica of Grace Anglican Church, Gudu District, Abuja.

Speaking on the theme for the One-Day Synod, “Take Heed unto Yourselves and to the Flock”, the Diocesan explained that this charge of Apostle Paul was a farewell message given to the Ephesians so that they would be on their guard and not allow the faith handed to them to be watered down as it passes to succeeding generations. This, the Primate said, is his exit message to the entire Diocese.

Primate Okoh opined that the first responsibility of leaders in the Church is to ensure that they are in right standing with God first, before leading others. He quoted copiously from the scriptures, pointing out that Christ has called Church leaders to shepherd His flock.

According to him, “Advancements in technology has become both a blessing and a source of serious concern. The flock must be well guided.” Hence, he charged Church leaders to be living examples to the flock of Christ and equip them with the truth of the gospel, so that they may be able to withstand the wiles of the devil.

The head of the Anglican Church in Nigeria observed that today the global Communion is plagued with internal crisis emanating from people who distort the truth to promote sin such as homosexuality, same-sex marriage, lesbianism and other despicable practices that ought not to be allowed in the Church. Therefore, he urged Christians, especially Church leaders to guard against such false doctrines.

Archbishop Okoh further challenged the laity to play their roles in the Church and refuse to use their wealth, education, societal influence or whatever advantages God has granted them to oppress the Church of God.

On the state of the nation, Primate Okoh described as worrisome the spate of insecurity in Nigeria and further condemned acts of terrorism and the continued detention of the Chibok Girls, Leah Sharibu and numerous others in the terrorists’ captivities.

According to him, “Giving Nigerians safe environment so they can go about their daily business and provide for themselves and their families, without being harassed, is obviously not too much to ask for. It is their fundamental human right and the constitutional responsibility of the Government.”

He commended the Federal Government and some State Governments who have begun to implement the New Minimum Wage of Thirty Thousand Naira (N 30,000), urging other States and the private sector to key in for the sake of humanity.

In his address, Primate Okoh highlighted the Synod themes from as far back as 2010, when he resumed office as the Primate of all Nigeria Anglican Communion and the Bishop of the Diocese of Abuja. He said, in 2010, the Synod theme was “In Times like These”; in 2011, “When the Righteous Rule”; in 2012, “God is our Refuge and Strength, A very present help in trouble”; in 2013, “Christian Stewardship”; in 2014, “Times of Stress” or Perilous Times”; in 2015, “Then give back to Caesar what is Caesar’s, and to God what is God’s.”; in 2016, “The Poverty of Riches.”; in 2017, “Teacher, Do You Not Care That We Are Perishing?”; in 2018, “The Christian Family”; and in 2019, “Servant-Leadership”; adding that they have been led to reflect on the need to take heed, both as leaders and members of the body of Christ in this one-day Synod. Hence, the choice of the theme; “Take Heed unto Yourselves and to the Flock” taken from Acts 20:28.

The Most Rev’d Nicholas Okoh concluded his Valedictory Synod address with an appreciation to all who supported him and his family before and during his Episcopacy and Primacy and a prayer for God to bless and reward them richly.

Meanwhile in his sermon during the Holy Eucharist Service, the Ven. Dr Gershinen Paul Dajur, general secretary of the Church of Nigeria Anglican Communion, emphasized that the Church has no business other than to protect the gospel of Jesus Christ. He said if the Church loses her grip on the gospel by adopting false teachings, she would lose her reward. He added that the watchword for Christians is to be courageous and stand for the gospel until they get to heaven, even if it means dying for it.

The Venerable opined that one must note that it is a privilege to be a shepherd of God’s flock, as well as be among His flock. He said the Christian duty is to be shepherds and not wolves, because it is God’s flock and His Church, not that of any man.

The preacher stressed that the message to take heed to oneself is a command and not an advise; therefore one must heed to it to stand. He said Nigeria as a country is undergoing persecution against Christians and therefore believers must not relax and think that all is well. According to him, all is well only if one is in Christ Jesus.