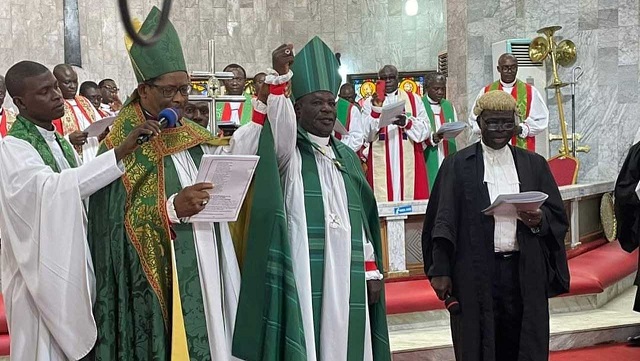 The Primate of the Church of Nigeria (Anglican Communion), Most Rev. Henry Chukwudum Ndukuba, has called on members of the church to support the newly elected Bishops and Archbishop with their prayers, as they go into their new places of assignments.

The primate made the call at the special Service of Presentation of Most Rev. Simeon Borokini, as the Archbishop of Ondo Province at the Archbishop Vining Memorial Cathedral Church, Ikeja Lagos, where seven other Bishops were elected to fill the vacant Sees and internal province of the Church.

Ndukuba recalled that the Episcopal Synod held on April 2, 2022 at the Cathedral Church of St. Peter, Ake, Abeokuta, The Rt. Rev. Simeon Borokini, Bishop of Akure, was elected as the Archbishop of Ondo Province.

According to the primate, by the elections, three priests are billed for elevation to the Order of Bishop while four serving Bishops will be moved from their Dioceses to the vacant Dioceses.

Ndukuba, who disclosed this via a broadcast on the ACNN Television, said:
“Our fathers in the Lord prayed and waited on God, and we are believing Him that He has helped us to do what we have done. We, in this Synod, not only discussed issues that concern the church, but also, we have elected new Bishops for some Dioceses and also translated some Bishops to new places to serve.”

Meanwhile, The Rt Rev. Abiodun Taiwo Olaoye, the Bishop Osun North Diocese was elected as the new Archbishop of the Province of Ibadan, to succeed The Most Rev. Segun Okubadejo.

Ndukuba, who later scheduled the consecration and presentation service of the newly elected Bishops and Archbishop to hold during the Church of Nigeria Standing Committee at Abuja, said that other processes of confirmation, training and enthronements would follow, and necessary Constitutional and Canonical steps would be taken as well.