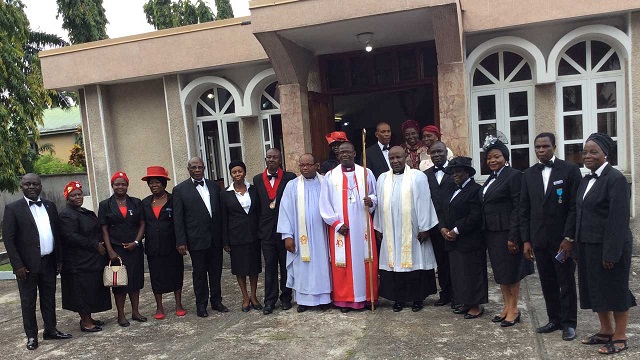 The Venerable Prof. Onyinyechukwu Okpala has reminded the knights of the Western Izon Diocese, Church of Nigeria (Anglican Communion), that they were selected and knighted to earnestly contend for the faith, which was once delivered to the saints. He said that a knight is not a civilian, but a soldier of Christ and defender of the faith and tradition of the church, adding that they must stand out for the truth, which is Jesus.

Okpala, who is also the guest speaker and retreatant at the event titled: “Fight a Good Fight,” organised by the Bishop of the Western Izon Diocese, Rt. Reverend Victor Ebipade Okporu enjoined them to shun uncontrolled pursuit of worldly wealth, fame and position, as well as sinful lifestyle, but pursue righteousness, godliness, faith, love, patience and gentleness.

“It is not a carnal battle but a spiritual one. Our weapons, therefore, are not also carnal, nor do we fight according to human standards. We need to put on the whole armour of God and fight to defend our faith and the interests of the kingdom,” Okpala said.

The Diocesan Bishop, Rt. Reverend Victor Ebipade Okporu in his admonition urged the knights to take their jobs serious and support the church. Okporu, who recently led the knights to a retreat at the Ibru Centre Agbarha-otor, Delta State, had a special interactive session with them. He commended their role and contribution in building retirement house for the former bishop, sinking borehole, among others, and spurred them to further support the church in other areas such as church planting, sponsoring crusades, seminars, attending Diocesan functions and assisting the diocese financially. The Bishop while urging the knights to strengthen their organisation said they should employ modern technology in their day-to-day activities.

Meanwhile, Okporu has dissolved its executive Council and directed that new officers be elected in due time even as he lamented that members that are not active would be de-robed.

He said: “It is worrisome that some knights are going the opposite direction. They lack commitment and are very unavailable. I am considering de-robing them. But I will need to be advised by this meeting.”

Explaining the theme further, Okporu said that the fight is a lifelong battle and proclamation of Jesus, which is fraught with struggle and challenges and counselled them to ensure that their salvation is secured.

He said: “In fighting the battle you have to preach the gospel and remember that as a Christian you will be attacked by the devil. Ensure that your head is covered with the helmet of Salvation. You must start by receiving Jesus Christ and having the assurance of salvation. You must come to the point in life when you are sure that if you die, you will go to heaven. It will be a tragedy that you die in the church and you don’t go to heaven. You should not fight as a knight and suffer in this earth and still go to hell, with your regalia and sword.”

The Chaplain of the Knight, Ven. Emmanuel Ogazi, led the participants in daily devotions and prayer for the nation, the church and their welfare. He urged them the endeavour to live lives worthy of the noble knights of the Church who are called to fight the good fight.