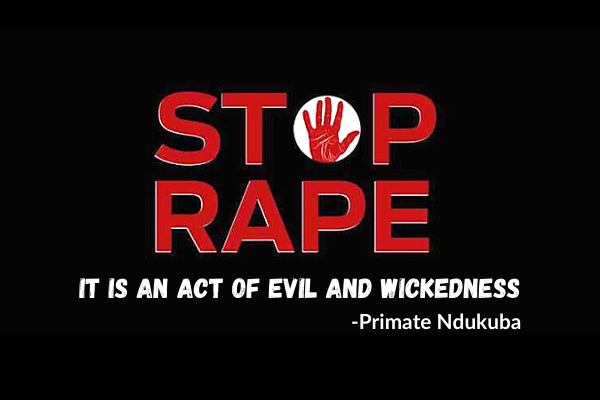 Growing concerns about the rising cases of rape in Nigeria has led to a renewed national outrage across Nigeria against sexual violence, especially as it affects the girl child.

Several authorities and civil rights activists are calling for a review of Nigeria’s criminal justice system that rarely prosecutes rape cases, with many requesting for more severe penalties for those guilty of rape.

Speaking during an interview recently to commemorate the 2020 Nigeria children’s Day celebration, the wife of the Primate of all Nigeria, Anglican Communion, Mrs Angela Ndukuba advised victims of rape not to shut their mouths, but speak up, in order to receive help and prevent a future re-occurrence for them and others.

Mrs Ndukuba who is the president of women organizations in the Church of Nigeria, Anglican Communion said, “At times because of the stigma, victims may not want to speak out, but rather carry that guilt throughout their lives. But, if you have been a victim of rape, please don’t just keep quiet, speak out, so you can be helped and prevent others from becoming victims.”

She defined the act of rape as sheer wickedness and urged parents, especially mothers not to leave their girl child with any man, no matter his relationship with the family.

Meanwhile, the Primate of the Church of Nigeria, Anglican Communion, Most Rev’d Henry Ndukuba also described rape as an act of evil and wickedness. He said those who engage in such a terrible act would not only face the wrath of the law, but also the wrath of God. According to him, the Bible condemns it, the Church is against it and therefore, it must stop. He further tasked security agencies to fish out those involved in this criminal act and ensure that they face the consequences of their actions.