LIFE OUTSIDE GOD IS A WASTED LIFE – BISHOP UDOGU

According to the Rt. Rev. Paul Udogu, Bishop of the Anglican Diocese of Afikpo, life outside God is a wasted life and efforts outside God are wasted efforts. He made this known on the day three of the annual Lenten Revival programme tagged, “The Way of the Cross,” of the Abuja diocese held at the Cathedral Church of the Advent Life Camp, Abuja. Using as a case study, the story of the prodigal son, the Bishop said that just like the prodigal son could not survive without his father, so also man cannot survive outside God, the creator and heavenly Father. He said the prodigal son wasted his resources, energy and even forgot his identity for a while, until he came back to his senses and decided to arise and return to his father. Preaching on the topic for day three, “Redeemed and Restored – I will Arise,” the guest preacher pointed out that no one can sing the song of deliverance and restoration in a land of slavery and captivity. He stated that the prodigal son became a slave in a foreign land by his own volition, because of his selfish desires and ambition; adding that when a person begins to live in sin, such a person is walking into the land of slavery. 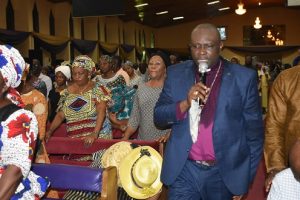 Bishop Udogu quoting the Bible, noted that the devil who has come only to steal, kill and destroy took away all that belonged to the prodigal son, because of his sin and rebellion. He therefore urged the congregation to run away from sin, because according to him, for every sin a person commits, there is a price. He cited Biblical examples and personal testimonies to buttress his message, explaining that sin is no respecter of persons and it can reduce a man to nothing. Hence, he warned all who were listening to allow no one deceive them, because the price of sin is very costly.

He stressed that God is set to do a new thing in the lives of His people, but they must stop and think, especially in this period of lent, which is a time for deep and sober reflection. He pointed out that the prodigal son came back to his senses only after he had a deep reflection; adding that many today are not thinking or reflecting on their thoughts and actions. The Cleric questioned several actions taken by individuals today, describing them as madness and further prayed that God will help everyone come to their senses this Lenten season. Continuing with the story of the prodigal son, Bishop Udogu explained that he did not want to die in his predicament, and so he made a decision and backed it up with an action.

The Bishop of Afikpo diocese observed that many are in the wrong place today, but yet they refuse to take the decision and action of accepting God’s offer for restoration and thus, they lose out because of sin and iniquity. He said God is asking people today, the question he asked Adam, “Where are you?” adding that a decision is very important in a time like this. Bishop Udogu encouraged all to arise and go to the place where they ought to be, because God is sufficient enough to take care of them. He defined the word, ‘arise’ to mean abandoning a certain lifestyle and regaining that which had been lost; explaining that the prodigal son made a complete U-turn, departed from his old life and traced his steps back to his father, believing that his father is able to restore him. 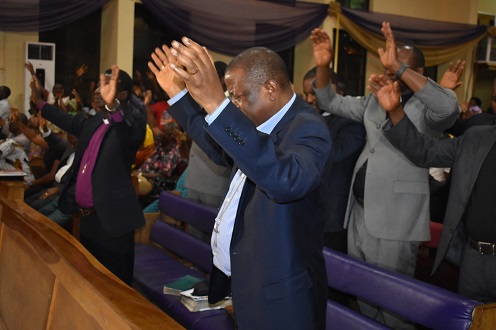 The Rt. Rev. Paul Udogu emphasized that now is the time to come to God in repentance, not in pride or self-righteousness, because God is so merciful, kind and willing to accept a repentant sinner. He said out of mercy, the prodigal son’s father overlooked all of his son’s sins and restored his garment (spiritual restoration), gave him a new ring (position of sonship and authority), new sandals (new beginning), and his inheritance. In the same way, he said, God is saying to all today to come back to Him and He will give them rest; adding that though the blood of Abel was crying for vengeance, the blood of Jesus is crying for mercy. Thus, he gave an altar call to all who may have missed the mark and in need of restoration and ended his session with prayers and declarations. 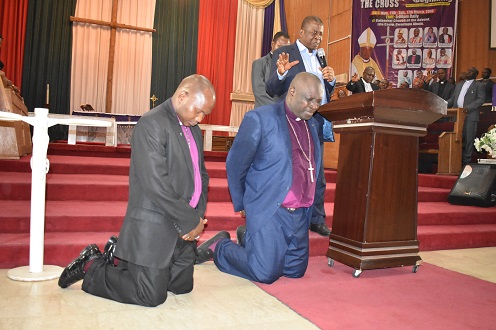 It was another powerful revival service where praises were lifted up to God, prayers and declarations were made, lives were transformed and souls were won for the kingdom of God.