GOVERNOR WIKE THANKS GOD FOR ELECTION VICTORY; ABERE CHARGES CHRISTIANS TO BE GRATEFUL 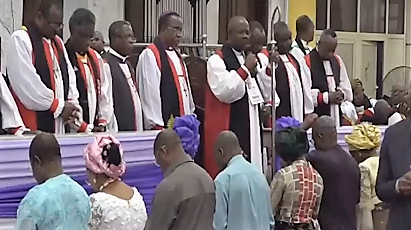 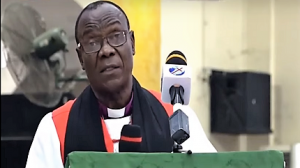 The Rt. Rev. Tubokosemie Abere JP, Anglican Bishop of the Diocese of Okrika has charged Christians to cultivate an attitude of gratitude. He gave this charge at the thanksgiving service organized in honour of Rivers State Governor, Nyesom Ezenwo Wike and his deputy, Dr (Mrs.) Ipalibo Harry Banigo for election victory and successful inauguration, which was held at St. Paul’s Cathedral Church Diobu, Port Harcourt. He said Paul enjoins believers to give thanks to God in every situation, bearing in mind that God is in charge of our lives and in control of every situation. The Bishop thanked God for blowing away all the storms of the elections with His wind and restoring peace in Rivers State and congratulated the governor and his deputy for a successful first tenure.

Speaking on the topic, “An attitude of gratitude”, Bishop Abere pointed out that Paul calls on Christians to rejoice always, pray without ceasing and give thanks in every situation. He opined that Christians are to rejoice in good times and bad times, because God works everything together for the good of those who love Him and are called according to His purpose; and also because God has saved man through the death of Jesus Christ. He said a persistent prayer lifestyle brings about a greater knowledge and understanding of God. Thus, believers should pray and not faint, he said.

The Bishop of Okrika diocese stated that many would ask how a person can have the courage to give thanks in negative situations; he however responded that the scripture does not ask believers to give thanks for bad mistakes or the failure of man, but that Christians are expected to in such situations show concern that is void of worry and trust God to see them through that situation. He said that for every good thing, one must show appreciation by thanking God; adding that thanksgiving is very important to God and is the vehicle on which miracles are moved.

Bishop Abere concluded his message with a call to the people of Rivers States to embrace the “olive branch” and reconciliation that the state government is offering and stop the infighting. He said the vibrant youths of the state are not violent people, but individuals who desire the care and concern of the government. He urged the government to pay pension and gratuity of pensioners as at when due and keep up the good work of ensuring the timely payment of salaries of civil servants; further calling on civil servants to reciprocate with diligence in service. Lastly, he called on the government, people of Rivers state and traditional rulers to synergize in the area of security, stating that “If there is no security, there will be no economic, political, religious or even individual growth.” 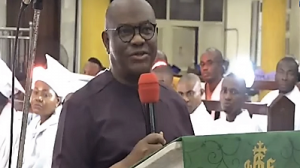 During the service, the governor of Rivers state, His Excellency Nyesom Wike thanked the Church and the people of Rivers state for their support before and after the elections and called on them to continue to support his administration and its policies, especially those linked to making Port Harcourt a clean city.