CABLE TELEVISION, A VERITABLE TOOL FOR EVANGELISM IN THE 21ST CENTURY SAYS OKOH 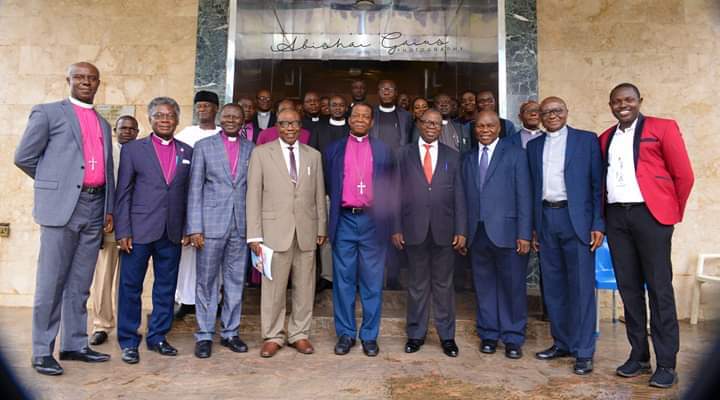 In mapping out the future for the Anglican Cable Network Nigeria (ACNN TV), a cable television channel owned by the Church of Nigeria, Anglican Communion, the management board of ACNN organized a two-day strategy retreat to re-strategize and formulate more effective ways of moving the station forward.

The retreat, which took place at St. Matthew’s Anglican Church Maitama, Abuja had in attendance the Primate of all Nigeria Anglican Communion, the Most Rev. Nicholas D. Okoh, who gave the Keynote address at the start of the programme. The Primate who gave a brief history of how ACNN started and the initial obstacles the station faced before and after it took off, pointed out that the vision for the future is for ACNN to become the foremost Christian television station in Africa; to have ACNN on reputable global satellites, to develop impactful programmes that will sustain viewership worldwide and to keep pace with modern technology in broadcasting.

Primate Okoh stressed that ACNN was established to promote the Anglican liturgy and heritage, as well as reach the world with the undiluted word of God.  He commended the current management of ACNN and thanked all who contributed to the take-off of ACNN and all who have continued to support the vision. He further called on dioceses and well-wishers of the Church to continue to support ACNN and patronize the station, which he described as a veritable tool for evangelism in the 21st century.

The Chairman of the ACNN Management Board, Sir Folu Olamiti appreciated the Primate for the vision of ACNN and for his unending support to the station. He stated the importance of having an Anglican television channel for the propagation of the authentic gospel of Jesus Christ, pointing out that ACNN TV requires proper funding and attention. He made specific mention of urgent needs of the station; appealing to dioceses and Churches to run more programs on ACNN and to individuals and organizations to help sponsor programmes.

Other contributors at the strategy retreat include the Most Rev. Emmanuel Egbunu, Bishop of Lokoja diocese, Bishop Chidi Oparaojiaku of Ohaji/Egbema diocese, Bishop Felix Orji of the Missionary diocese of CANA (USA and CANADA) and other speakers from the media, legal and medical professions.