ANGLICAN LEGAL OFFICERS CONFERENCE; OKOH, AKINOLA ADMONISH THEM TO UPHOLD THE IMAGE OF THE CHURCH 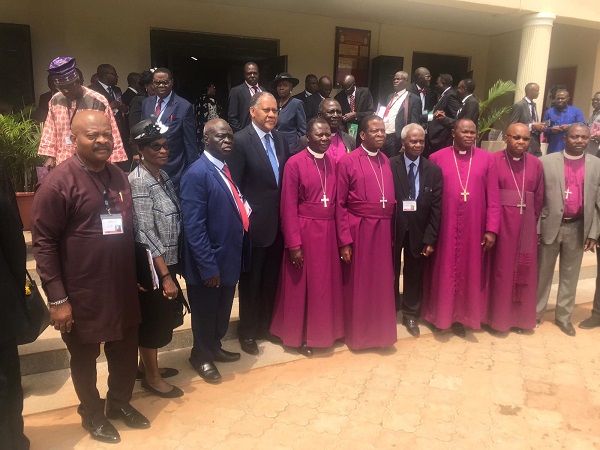 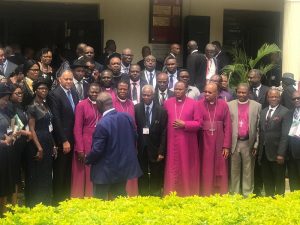 The Church of Nigeria Anglican Communion has ended the ninth edition of its annual Chancellors, Registrars and Legal Officers conference held at the Basilica of Grace, Gudu District, Apo Abuja, with the theme, “Contending for the faith which was once for all delivered to the saints.”

According to the Registrar of the Church of Nigeria, Anglican Communion, the conference, which has participants from all the dioceses of the CoN Anglican Communion was initiated to create an avenue for legal officers of the various dioceses to come together to discuss their common problems, educate themselves, and learn from the senior chancellors and registrars. He said the creation of 165 dioceses from the initial 16 dioceses in 1979 led to a multiplication of chancellors, registrars and legal officers, some of whom were not conversant with Anglican traditions, constitution and canons; hence, the need for such a gathering to enlighten the legal officers of the dioceses.

The Most Rev. Nicholas Okoh, Primate of all Nigeria Anglican Communion in his address appreciated the legal officers for their humble service to the Church, notwithstanding the level they have attained in their profession. He said they have contributed immensely to the integrity of CoN through their services and urged them to continue to use their profession for the glory of God.

Primate Okoh expressed sadness that greed and over ambition has entered into the Church and as such, the fear of God is absent in many Churches. He said, “The fear of God has disappeared and many in the Church are ganging up against God and His Church.” According to him, “When the fear of God dies, what we have is a mere sociological expression, at best a cultural centre and not a Church.” Hence, he charged all present to do everything to restore the fear of God among the lay, clergy and Bishops. 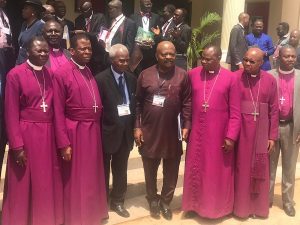 The head of the Anglican Church in Nigeria said everyone must join hands together to push the Church forward and that all must work for the unity of the Church. He stressed that the Church must not allow the disunity that has afflicted Nigeria to afflict the Church, because according to him if this happens, then Christians have lost their saltiness and light, in this dark world.

He said lies and falsehood have allowed court cases to be prevalent in the Church, even though the Bible discourages Christians from taking fellow believers to court. Thus, he implored legal officers not to allow people to cajole them into using what they have negatively, because it will bounce back to the Church and create a bad image for the Church.

Also speaking at the conference, on the topic, “The Church in diversity”, the former primate of the Church, the Most Rev. Peter Akinola, ably represented by the Vice Chancellor of Ajayi Crowther University, Oyo, the Rt. Rev. Prof Dapo Asaju pointed out that the Church must avoid nepotism, tribalism, rancour, strife and election manoeuvres when making spiritual appointments and uphold the Lordship of Jesus Christ and the authority of the Holy Scriptures even in diversity.

According to him, “Under the guise of human rights, the concept of diversity has been extended to defend people who choose to be different from others; which has led to the endemic apostasy in the Western world where same-sex relationship has been legalized and LGBT groups canvas for recognition and admittance into the household of faith, even when what they do is incompatible with the Church that the gospel stands for.”

He charged legal officers to carefully supervise the legal frameworks that guide the activities of the Church, in strict compliance with the constitution, dioceses, as well as the national Church; adding that they are “to protect the image of the Church from embarrassment in the eyes of the public by defending the truth and justice in the Church.”