BEING IN CHRIST IS ACCEPTING JESUS AND DENYING THE WORLD, NOT ATTENDANCE IN CHURCH OR PRACTICE OF RELIGION – BISHOP YAHAYA

“What is stopping our miracle today, is fake Christianity.”

This was the submission of the Rt. Rev. Timothy Yahaya, Bishop of the Anglican Diocese of Kaduna on the day one of the annual Lenten Revival programme tagged, “The Way of the Cross” of the Diocese of Abuja, which was held at the Cathedral Church of the Advent, Life Camp, Abuja. Speaking on the topic for the day, “New Creation,” the Bishop said that to be a new creation is to be crucified in Christ. He explained that many Christians today are living a life of syncretism, where they embrace any belief and practice, including that which is contrary to the word of God. He said many of them are no longer different from unbelievers, because they allow the world to dictate their lifestyle. He observed that the Christianity being practiced today is one where believers say, “It doesn’t matter” and so, they crave new things, new dressing, new face and even, a new gender. The guest preacher however pointed out that once a thing has left the factory, it is no longer considered as new; adding that it is only the grace and mercy of God that is new every morning.

Bishop Yahaya emphasized that being in Christ is accepting Jesus Christ as Lord and Saviour and denying the world, not just going to Church or practicing religion. He said that the Bible must be translated in one’s life, because Jesus died to give man a new life that is not under the bondage of the devil. He explained that anyone who is in Christ is a new creation and therefore, that person’s old life is in the past and forgotten by the Saviour, Jesus Christ. He quoted from the scriptures, pointing out that God forgives all sins whenever one surrenders to Him and used the simile of a caterpillar and a butterfly to describe the sinner and a Christian; stating that a sinner is like a butterfly who when he or she receives Christ becomes a beautiful butterfly and starts to fly. 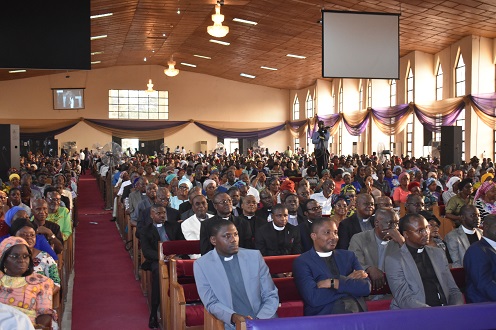 Speaking on the general theme for the programme, “A New Beginning,” the Bishop of Kaduna went down the Bible story to the creation where Adam sinned against God and God asked him the question, “Where are you?” He said this is a question that anyone living in sin must answer; pointing out that after Adam’s sin, a veil was put between man and God. But, according to him, when Jesus died, He took on Himself the sins of man and caused the veil separating man and God to be torn in two. He said with the death and resurrection of Jesus Christ, the old religion is gone and no other sacrifice is needed to cleanse man.

The cleric emphasized that the death of Jesus Christ gave man a new beginning, where God is no longer far away from His people and no individual is excluded from going before God in worship and prayer. He highlighted the significance of the tearing of the curtain, which once covered the Holy of Holies, explaining that now Christians can worship and pray to God at any time and approach Him without dying, as in the case of Uzzah. He also noted that all Christians are now part of the royal priesthood and are the righteousness of God in Christ Jesus. 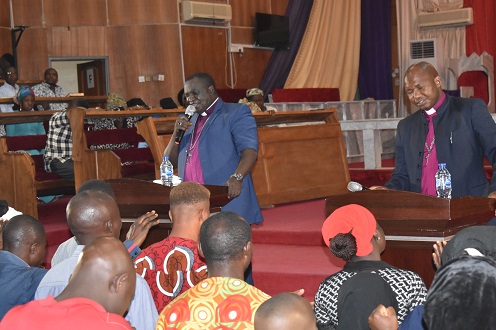 The Rt. Rev. Timothy Yahaya concluded his message stating that many do not know what they miss out on when they refuse to accept Jesus as Lord and Saviour. According to him, when one gives one’s life to Jesus, one becomes a new creation and God becomes that person’s Father, which he said means that one will live a victorious Christian life of no defeat. He added that a believer can trust God for anything, including healing and still have the gift of eternity with God. Hence, he gave an altar call for all who were yet to receive Jesus Christ as their Lord and Saviour to step forward in faith and accept Him into their lives; so that they can also partake of this new life in Christ and have a new beginning. 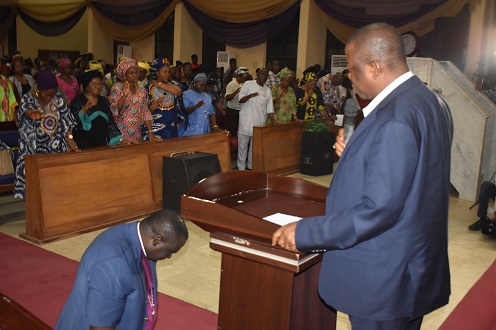 The gathering, which had people from all the Churches in the Diocese of Abuja Anglican Communion, also had in attendance the Primate of all Nigeria Anglican Communion, The Most Rev. Dr Nicholas D. Okoh who introduced the guest preacher and the Gbagi language translator, the Bishop of the Diocese of Gwagwalada, The Rt. Rev. Moses Tabwaye and also led the prayers said for the guest preacher after his ministration. It was a glorious service that marked the beginning of the 7-day Lenten Revival programme.