Nigeria is sliding into Totalitarian State

The Bishop of Warri Diocese Anglican Communion, Rt. Rev. Christian Esezi Ide, says 88.6 million Nigerians are living in extreme poverty across the country, noting that the poverty-stricken population of Nigeria needs provision from the LORD. 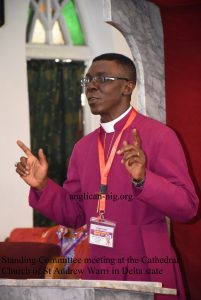 Bishop Ide expressed dismay over happenings in Nigeria, pointing out that the country is gradually sliding into totalitarian state, he expressed belief that God’s intervention will deliver His people and protect those suffering from terrorist attacks, herdsmen killings, kidnappers as well as those suffering “yahoo plus boys”, victims will have God’s spiritual coverage.

He commended His Grace, the Archbishop of Bendel province Most Rev. Friday Imaekhai, Bishops, Mama Bendel, Bishops’ wives, delegates, Local organizing Committee for making sure they have a successful hosting.

The Warri Diocese Bishop went memory lane stating that the first contact of Christianity in Warri was in 1555, when Augustinian monks visited Warri. According to him, by 1934, Warri had become a district made up of Warri and Burutu parishes in the Diocese of the Niger with headquarters in Onitsha. He explained that the Warri Diocese was inaugurated Friday January 25th, 1980, saying the Diocese began with archdeaconries namely, Isoko and Urhobo with Warri as its headquarters and that as at today, the Warri Diocese has grown and given birth to four (4) Diocese which are; Ughelli, Oleh, Western Izon and Sapele, he added that the Diocese is composed of the Cathedral, twenty (2) Archdeaconries and four (4) Chapels, spanning through three (3) Local Government Areas, Warri South, Uvwie and Ethiope East.

Bishop Ide noted that out of the thirteen (13) Dioceses that make up the Ecclesiastical Province of Bendel, the Warri Diocese ranks third coming after Benin and Asaba Diocese.

He expressed gratitude to God and Primate, His Grace, Most Rev. Nicholas D. Okoh whom the Holy Spirit used to fix the Standing Committee Meeting in Warri, adding that the meeting will come with blessings to the people.