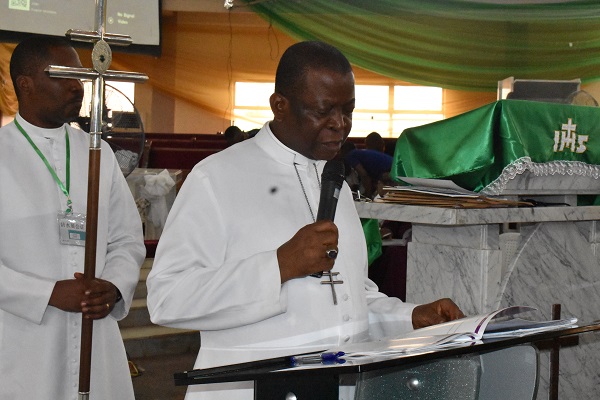 The Primate of all Nigeria, Anglican Communion, the Most Rev. Dr Nicholas D. Okoh has termed it anti-Christian to engage in favouritism, tribalism, and nepotism in the matters of faith; because according to him, every Christian is one in Christ. He made this known while delivering his opening address at the 2019 Standing Committee Meeting taking place at the Cathedral Church of St. Peter, Asaba, Delta State. He added that the chief cause of defeat of Christian missions in North Africa was doctrinal differences and Christians seem to be making the same mistake today.

Speaking on the theme for this year’s Standing Committee Meeting, “Fight the Good Fight of Faith,” Primate Okoh said that upholding the Christian faith faithfully demands a constant battle against the world, the flesh and the devil.

According to him, “the fight is first and largely spiritual, and the enemies are satan and the forces of darkness, not our fellow human beings, though human beings can be used as instruments in the hand of satan and his cohorts.”

He explained that in the good fight of faith, the focus should not be on self or earthly gains, but ensuring that God is honoured in every way. He said it is time for those who know their God to stand up and make a difference by carrying the fight of faith into all their endeavours.

The Primate of all Nigeria concluded that it is compulsory for all Christians to engage in the good fight of faith, but with spiritual discernment and spiritual maturity. He urged Christians to uphold their leaders in this fight and support them wholeheartedly.

On the state of the nation, Primate Okoh said it is unfortunate that discourse on insecurity in Nigeria has become endless, causing the nation to become uncomfortable and unsafe for its citizens. Therefore, he urged the Federal government to direct their fight towards the sponsors of these destructive crimes no matter who they are. He appealed to the government to be diplomatic in dealing with the Xenophobic attacks in South Africa against Nigerians and further called on Nigerians to resist taking laws into their hands. He called on the Federal government to improve the economy, adequately empower the youths and implement without further delay, the minimum wage.