SUBSTANCE ABUSERS ADVISED TO SEEK HELP, NOT LIVE IN DENIAL 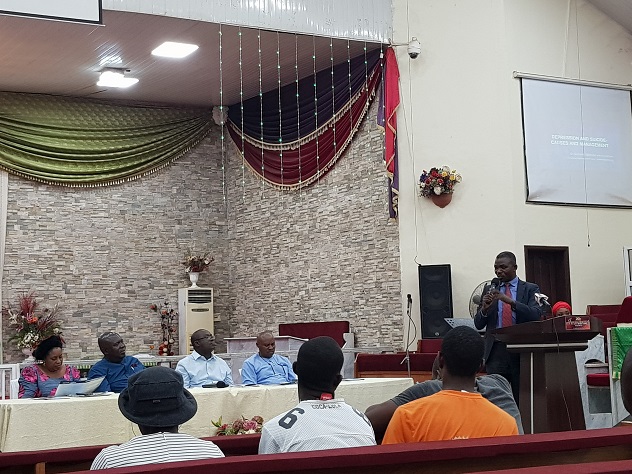 With the spate of suicide in Nigeria and in the world today, the Anglican Diocese of Abuja organized a seminar tagged, “Mental well-being: substance abuse and sustainable future – seeking help instead of suicide”, as part of the series of programmes to mark this year’s Carnival For Christ, an annual event initiated to celebrate the Lord Jesus Christ in a special way and to commemorate when the Diocese was founded.

The seminar which took place at the Basilica of Grace Anglican Church, Gudu, Abuja had four notable speakers in the persons of Mr. Henry Ezenwa, the coordinator of the Youths and Teen Chapel of All Saints’ Church, Wuse, Mr. Onyekwue Nnadozie, the National Coordinator and Founder Trauma Awareness and Resilience (TAR) Initiative, Mrs. Uche Fanimokun, a certified Mental health Therapist, and Dr. Dominic Ogbeche, a Medical Doctor and Specialist Psychiatrist.

Mr. Ezenwa, who spoke on the topic, ‘Hard drugs and addiction – a destiny destroyer’, described addiction as a selfish form of behavior, because it is pursued without a thought to anyone else. He said addicts are less concerned about their behavior or appearance, and they often use drugs to cope with the pressures around them. The speaker who described himself as a product of grace because of his ability to quit smoking, warned attendees against thinking that they should continue to indulge in substance abuse, and be later delivered by the grace of God. He emphasized the importance of recognizing that one has an addiction and the need to seek help. According to him, self-denial is rampant and many excuse their habit rather than recognize it for what it is. He stated that there is nothing good about drug abuse and concluded that addiction is 100% preventable if one submits to God and resists the devil.

Speaking on the topic, ‘Nigerian youths and substance abuse; the psychosocial implications and preventions: Role of the Church and community’, Mr. Nnadozie informed attendees that the 2019 Nigerian Youth Policy states that the youths consist of those who fall within the 15 to 29 age bracket. He pointed out that youths have material, social and psychological needs; however psychological needs have been isolated for a very long time, and many do not consider it as important as the other two categories. According to him, “If we make out time to find out the mental state of individuals in our organizations and churches, we will correct a lot of ills in the country.” He said substance abuse disconnects one from family and friends and disempowers a person by making him or her unable to do things he or she used to do before. Mr. Nnadozie ended his talk with a call to the Church, family and society to work together, not in isolation, to curb this menace in the society.

The third speaker, Mrs. Fanimokun said whatever a person takes in excess is abuse. Speaking on substance abuse: progression of substance use, she explained the different stages of drug abuse as the experimental stage, recreational or social drug use and the last stage, which is substance abuse and dependence. She noted that the experimental stage may appear harmless, but it could result to a lifetime of drug abuse. She pointed out that most people at the dependence stage live in denial of their addiction; hence, she urged parents to be vigilant, pay attention to their children and take measures when necessary. The mental health therapist advised those dealing with addiction not to live in denial, but seek help early.

According to Dr. Ogbeche, mental health is the most important state of health. He pinpointed alcohol as one of the leading cause of depression and advised that people should not experiment at all, in order to be free from addiction. He stressed that if one lives a healthy lifestyle, the tendency to go into depression is low. He said suicide is wrong, because one is not the giver of life. Therefore, he called on all to learn to deal with stress, rather than thinking of dying. The psychiatrist charged all to keep hope alive and have a positive outlook towards life.

The seminar was rounded off with an interactive session, where questions were asked and answers given and testimonies were shared by recovering addicts.