PETER AKINOLA: WHO BLINKS FIRST?: BIBLICAL FIDELITY AGAINST THE GAY AGENDA IN THE GLOBAL ANGLICAN COMMUNION 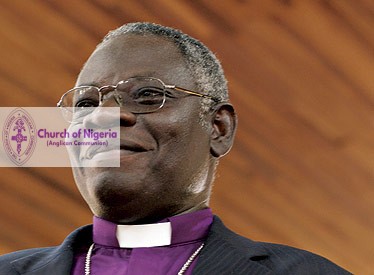 This is an excerpt from a new book on Archbishop Peter Akinola in which I am given some recognition. I recall that bishops John Howe and Bishop Bill Atwood were present on the occasion. David “On August 3, 2003, Robinson’s confirmation process began. At the House of Bishops, nothing unfavorable to him happened. Then the battle shifted to the House of Deputies.

The first two of the three votes required to ratify his election were held, with Robinson winning. He was coasting home to victory. The road to becoming the first divorced, openly gay Bishop elected in the history of the worldwide Anglican Communion lay before him. But suddenly, on August 4, a series of allegations, serious and scandalous accusations, charges difficult to ignore, was raised against him. David Lewis, a male parishioner in Manchester, Vermont, a neighboring Diocese to Robinson’s, accused Robinson of inappropriately touching him in a suggestive way. Following that allegation was another that “Gene Robinson’s website was linked by one click to 5,000 pornographic websites.” The second accusation came from one David Virtue. By the rules of the Episcopal Church, all outstanding allegations about an elected candidate must be resolved for his consideration to proceed to the House of Deputies for the consent vote. As a result, the Committee on the Consecration of Bishops was mandated to look into the allegations against Robinson. That same August 4, the committee began a two-day hearing.

The enquiry was conducted in the open. Supporters and opponents alike were given the opportunity to present their case. Robinson was a master in the art of wooing public sentiment to his advantage. He knew how to shift the burden to opponents and attract sympathy to his side. At that critical period when his reputation was at stake, he knew how valuable the image of a “family man” would be to boost his public perception. David Virtue’s accusation regarding pornography was not as easily dismissed. He was physically present at the Convention and had made the damaging allegation openly. Usually, routine press briefings were held during the Convention as sideline activities.

It was during one such scheduled exchange with the media, on Monday, August 4, with Virtue in attendance, that the allegation surfaced. Virtue indicated his intention to speak, and he was invited to the podium. From the microphone, he posed a question for Bishops Wendell Gibbs of Michigan and Ed Little, Gibbs’s counterpart from Northern Indiana. The two were the spokespersons for the Bishops at the Convention. “Do you know that Gene Robinson’s website is linked by one click to 5,000 pornographic websites?” He had dropped a bombshell. The media gathering was rocked by consternation. “No,” the bishops had replied him pointedly. Virtue then steered the bishops to his real point: “Well, now that you do know this, will this change your vote on his election?” It was Gibbs who replied, coolly: “I would doubt the veracity of such information at this moment.” Curtly, he dismissed the allegation as “a last-minute ploy.” Flushed, Virtue found his way back to his seat shaking his head.

Unfortunately, at that point in time, he couldn’t have stepped on a more vicious rattlesnake. He became a marked man that must be brought down at all cost. Within hours of the press conference, the gay community went into hyper-frenzy, activating all of its connections and networks. The cult-like fury to undo the harm Virtue had unleashed was pursued with a rabid ferocity. There was only one desired outcome: to neutralise the damage to Robinson’s reputation. The rescue mission had to be as fast as possible.

Robinson had to be washed of the stain to which his character had been exposed. He must be made to look good before the Convention delegates. On the other hand, the opposite had to be done to Virtue. His credibility and integrity had to be torn to shreds, his moral standing brought into question; doubts had to be sown about his reputation both before the Convention delegates and in the wider public. Virtue must be discredited, tarnished as a malicious, spurious, and biased character assassin.

Gay movements thrive on a persecution complex. They treat anything uncomplimentary as an assault, a challenge to “war.” Within a short time, an enormous volume of research was done on Virtue. The astounding results “brought out” a lot about him. Virtue was taken to the cleaners. Every medium that old and new technology permitted—newspapers, magazines, blogs, websites, etc.—was drafted as an assault weapon.

THERE WAS A LOT MORE BUT THIS WILL GIVE YOU AN INKLING OF WHAT IT WAS LIKE BACK THEN WHEN ALL HEL BROKE LOOSE OVER ROBINSON’S CONSECRATION. NOW YOU KNOW WHY THE GLOBAL SOUTH HAD NO ALTERNATIVE TO BREAK FREE FROM TEC.