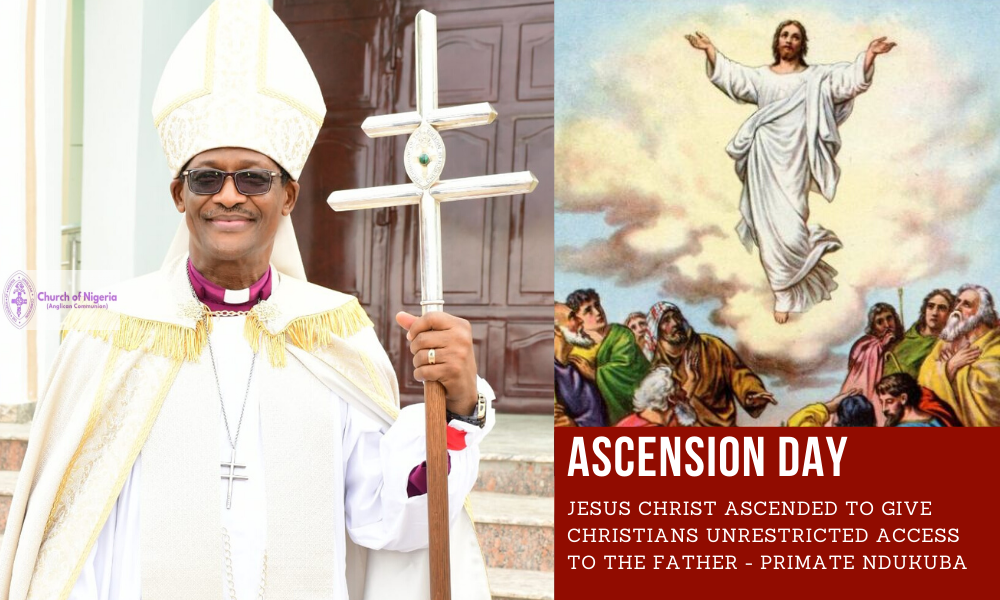 As Ascension Day is being celebrated in Christendom today, Christians have been charged to hold tenaciously to their confession and faith, and not allow the enemy to deceive them, because Jesus Christ by His ascension has set them free from every bondage of the devil.

The Archbishop, Metropolitan and Primate of the Church of Nigeria, Anglican Communion, the Most Rev’d Henry C. Ndukuba gave this charge on Ascension day at a church service recorded at St. Matthew’s Church, Gwarinpa, Abuja and broadcast online.

Primate Ndukuba, who preached on the topic, “Christ is exalted above all”, emphasized that no enemy has the right to hold any believer captive, because when Jesus died, resurrected and ascended, He held captivity captive and won total victory over sin, death and the devil.

According to him, “Jesus paid the price and so every accusation of the enemy is cancelled and we have nothing to fear.”

He explained that the marking of the ascension of the Lord, Jesus Christ, 40 days after Easter is a celebration of the glory of Jesus Christ, which He had laid aside to come to earth to bear the sins and burdens of mankind. The Archbishop argued that if Jesus hadn’t ascended to heaven, ministry would have been limited, because believers would not have received the power of the Holy Spirit that is necessary for exploits in the kingdom of God.

Primate Ndukuba pointed out that Jesus’s ascension revealed that victory has been accomplished, heaven has been opened and that Jesus Christ is coming back again. He asserted that just as Christ died, rose again, and was lifted up, so also shall believers in Christ be resurrected and raptured.

He said, “Today, Jesus was exalted and enthroned; and He resumed His position at the right hand of His Father.”

The Primate noted that nothing could stop Jesus Christ; neither death nor gravity, because He is Lord over all. He quoted copiously from the Bible to buttress his point that Jesus ascended to heaven in fulfillment of the scriptures. He mentioned that the point of Ascension is still in Jerusalem, just as the empty stone; adding that Jesus’ ascension happened in reality, not fiction.

The Most Rev’d Henry Ndukuba stressed that Jesus Christ opened the way, so that Christians could have access to God, and into His presence at any time. He said Christ became the great High Priest and intercessor for all who choose to accept Him as Lord and Saviour. Hence, he urged Christians to honour Christ and trust Him, because He is faithful and He would surely come back again to take them home, just as He had promised.

Lastly, he declared that by the reason of the word of God, every yoke is broken; and everything that has held believers captive is broken in Jesus name.