“There is something which is distinctively Christian in the leadership of the church that is not found in other arenas.”Speaking at the grand finale of this year’s 3rd Session of the 10th Synod, Thanksgiving Service of the Diocese of Abuja at the St. Matthew’s Anglican Church, Gwarinpa Abuja the Rt. Rev. Dr Felix Orji bishop of Missionary Diocese of CANA West from the convocation of Anglicans in North America (CANA) said a Christian leader is a servant of Christ and Church, he has influence.

Dr Orji say a Christian leader is not serving himself his tribe but serve Christ in humility, caring for the spiritual needs of the Church in hard work.  No man according to him is a superstar but first and foremost called to work for God, work with God and under God depending on 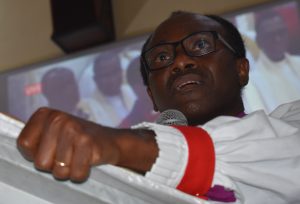 the master 100%.  In other words, Bishop Orji says Christian leaders are under the authority of God not man obey his words because they are accountable to him and serving the church sacrificially in everything in humility thinking less of yourself without counting your position, title and power..

He spelt out the mysteries as the incarnation of Jesus, his ministry, his death and resurrection, his ascension and sitting at the right hand of the father adding that this is the fundamental function of Christian leadership rendered faithfully without compromise.

He emphasized that a Christian leader does not trifle with the words of God, he has no permission or freedom to choose or change the message that God has given to his people so as not to get into trouble.He vehemently spoke against the prosperity gospel as being reached in the world today saying it is not biblical, adding that Christians are called to preach the undiluted gospel of Christ and not the get rich quick gospel.

The Rt. Rev. Felix Orji said the Christian leader must suffer for the sake of the gospel, deprived of many things and be fools for Christ stressing that if Christian leaders want to avoid persecution they should not bother to follow Christ.  Christian leader according to him must be ready to suffer emotions as a father and the family of God, to be able to nurture the children and warn them about the danger, thereby imitating him and be disciplined.  He opined that a father should love the Children be gentle and be affectionate towards them.

Finally he said there must be congruency in what the servant leader preaches and lives a balanced ministry following Jesus to the end.

He showered encomiums profusely on the Primate of all Nigeria (Anglican Communion) the Most Rev. Nicholas D. Okoh.  He said the Primate knows how to lead by serving and he also knows how to serve by leading.

He went down memory lane how the Primate as a Christian servant leader relates with him and as after his welfare when he was indisposed.

The Rt. Rev. Felix Orji employed the tripod example of informing educating and entertaining the congregation in his sermon never a dull moment.  What a beautiful way of ending the 2019 3rd Session of the 10th Synod.