There have been very significant milestones in the undaunted advance of the Church of Nigeria especially during the tenures of the man who has been rightly called the Visionary Primate. The Most Revd. Joseph Abiodun Adetiloye, DD (1988-1999). He it was who opened up the unreached areas to the gospel as part of our response to the Decade of Evangelism proclaimed at Lambeth in 1988. a significant achievement of his tenure is the creation of ten (10) Missionary Dioceses in 1990, a feat that was virtually repeated from 1996 onwards. It was during his tenure that the idea of internal Provinces gained ground with the first creation of three internal Provinces covering the three broad geographical regions of Nigeria. These earned the Church of Nigeria the reputation of being the fastest growing Province in the Anglican Communion.

A paradigm shift was launched in March 2000, when The Most Revd. Peter J. Akinola, DD,CON (2000-date) was presented as the third Primate of the Church of Nigeria, Anglican Communion. On the assumption of the primacy of the Church, Archbishop Akinola did not hide his granite determination to take the Gospel of Christ to the nook and crannies of Nigeria; and with the cooperation of his brother bishops the number of dioceses has risen astronomically.

From 76 in year 2000, we now have 121 as at May 2007! He has focused his attention on consolidation of previous efforts to keep the banner of the gospel flying higher over the land, and the Church of Nigeria standing tall and taking its rightful place in the Anglican Communion.

One of the greatest challenges before the Church today is to embark on aggressive evangelism and discipleship that will build the Church into a strong witness for this and future generations. The Church of Nigeria is now actively reaching out to the UK and the USA through the ministry of our Chaplains in those parts. Our members who visit those nations or have settled there are the major focus of our ministry, while looking out for all others who are willing to respond to the gospel. We must pray that the Lord will raise more labourers for His work. Some of these are already in the seminaries undergoing training in our institutions and we look forward to a generation of faithful workers in the Lord’s vineyard. Much attention is being given to our theological institutions through the Church of Nigeria Endowment Fund which is aimed at making the Church self-reliant financially to carry on the work of mission. 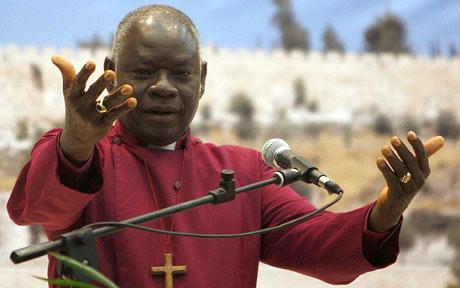 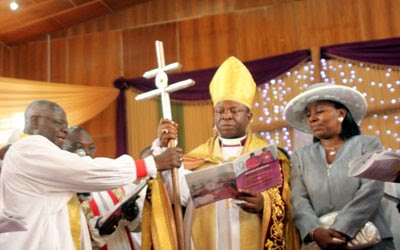 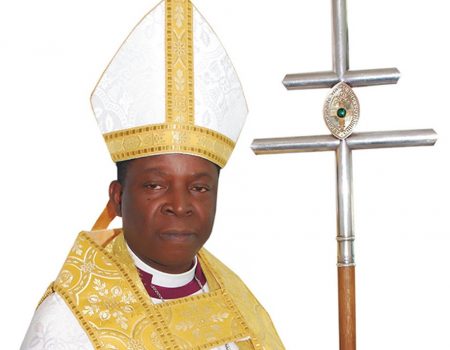 The Church of Nigeria has over the years become established as the champion of mission efforts and has maintained its reputation as the fastest growing province in the Anglican Communion. That reputation has carried with it important and challenging responsibilities not only to model biblical ethics but to condemn every compromise or departure from the position held out by the Scripture. The Church was founded through the missionary effort of the CMS (Church Mission Society) and is being expanded in like manner. The mission arm is the Church of Nigeria Missionary Society (CNMS), which holds out the gospel flag to different parts of the country.

Considering the sheer vastness of the Church of Nigeria (Anglican Communion), it was split into three Provinces on 20th September 1997 for effective management.

In pursuance of pragmatic evangelism and for ease of administration, a 10-Province structure for the Church of Nigeria (Anglican Communion) was proclaimed at the Cathedral Church of Christ, Marina Lagos, on January 19, 2003. The provinces are: Lagos, Ibadan, Ondo, Bendel, The Niger, Niger Delta, Owerri, Abuja, Kaduna and Jos. Presented at the event were new Arcbishops Agbaje, Abe, Akinfenwa, Okoro, Nglass, Idowu and Mani. These Archbishops constitute the Primate’s Council which meets from time to time.

There can be no organisation as large and complex as present day Church of Nigeria (Anglican Communion) without problems. But problems do not worry the incumbent Primate, who, since he was presented on 25 March 2000, has made several efforts in pursuit of peace.

Archbishop Akinola has, together with the entire leadership of the Church, evolved a Vision for the Church of Nigeria, which by the grace of God and the co-operation of all will take us to our “Eldorado” in a record time.

The Vision is clear. In summary, it is to the effect that the Church of Nigeria (Anglican Communion) shall be bible-based, spiritually dynamic, united, disciplined; self-supporting, committed to pragmatic evangelism, social welfare and a church that epitomizes the genuine love of Christ.

This vision statement has opened up fresh vistas of ministry which hitherto had been non-existent – all in a bid to become more relevant to the needs of our members and nation.

The machinery for achieving the set goals and establish a CARING CHURCH has been at work. The initial goal of being bible-based has led to the championing of adherence to scripture worldwide. The goal of being self-supporting is being actively pursued through the Endowment Fund and thesocial work is going on in the oft ignored hintherland and villages nation-wide.